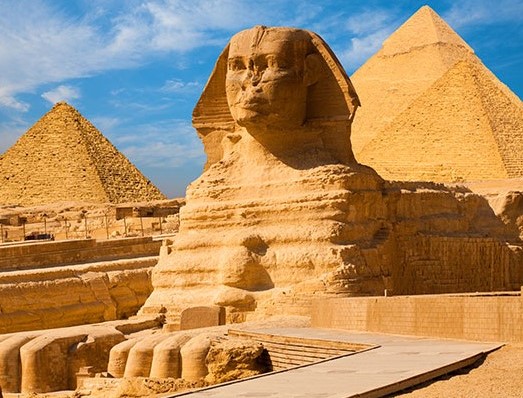 The perfect stopover to see the world’s greatest tourist attractions.
Come and enjoy the pyramids, Sphinx, the Egyptian Museum of Antiquities and the famous Khan El Khliliy Bazaar amongst other great sites.

Welcome to Egypt! Upon arrival Your tour begins when you are greeted by our representative Executive Travel who will assist you through immigration and customs formalities. After you have collected your luggage, he will then take you, in our deluxe vehicle, to your Cairo hotel and overnight.

After breakfast, you will meet your Egyptologist guide in the hotel lobby. Begin by exploring the desert antiquities dating back to the beginning of a civilization that arose over 5,000 years ago. You will venture through the desert to visit some of Egypt's oldest sites. First, go to the Pyramids of Giza. Nothing evokes the long and intriguing history of Egypt as powerfully as the pyramids. Rising from the desert, Khufu (Cheops), Khafra and Menkaura symbolize the enigmatic tug of Egypt in our imaginations. The Great Pyramid of Cheops immortalizes the son of Sneferu and Hetepheres. Though little is known about this pharaoh, his pyramid is the largest of the three and is comprised of 2.3 million stone blocks, each weighing an average of 2.5 tons., the colossal statue of the Great Sphinx, which as stood guard over the pyramids for millennia. Carved from an outcrop of rock, the Sphinx remains the ultimate symbol of Ancient Egypt with its lion's body and human head. After your exploration of the pyramids, drive to Sakkara. The necropolis at Sakkara is where King Zoser's Step Pyramid was built. This vast site in the heart of the desert plateau is the largest necropolis in Egypt. Extending for almost five miles, the complex forms a collection of pyramids, temples and tombs that is fundamental to understanding the history of ancient Egypt. Back to your hotel and overnight .(B, L)

After breakfast, you will meet your guide at the lobby. Begin your introduction to Cairo at the famous Egyptian Museum of Antiquities. The museum houses the greatest collection of Egyptian royal treasures in the world. Your expert guide will take you through the highlights, including the famous Tutankhamen Collection of golden treasures You will then visit The Alabaster Mosque of Mohamed Ali, the largest structure built during the first half of the 19th century. Continue to visit the most famous Bazaar in the middle east Khan El Khliliy Bazaar. Back to your hotel and overnight.(B, L).

Today you will be transferred to the airport to take your international flight home or your next destination.