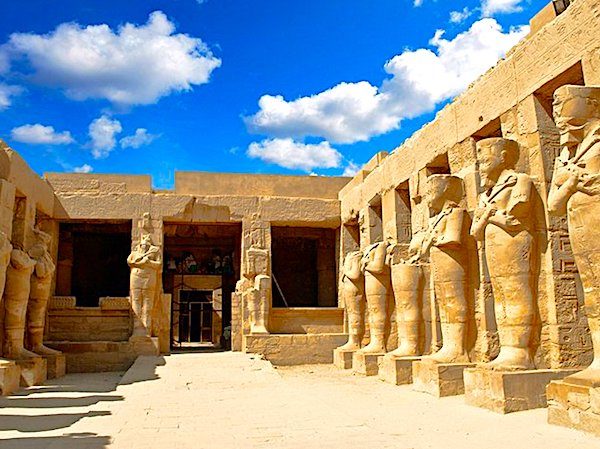 (PLEASE NOTE: We can organise tours to leave any Thursday as needed. Private tours, small groups or large groups most welcome. There will be surcharge for Dec departures)

Our Egypt 5 Star Deluxe Tour is a travel experience unlike any other on earth – a journey through time, a magical confrontation with a civilisation 5000 years old.

It is enchanting and mind boggling to stand before the pyramids of Giza or to admire the grandeur of Karnak’s temples and all it’s other wonders.

First time visitors on our Egypt tour will also be surprised by the superb selection of top quality hotel accommodation we provide for our customers.

We are the real experts in Egypt tour travel and have put together a fantastic 5 STAR deluxe tour package to highlight this truly amazing country.

We offer a number of popular add-ons which can be incorporated into your tour including Abu Simbel (highly recommended), hot air ballooning over Luxor.

PLEASE FEEL FREE TO CHECK OUT OUR PREFERRED DELUXE HOTELS...

Upon arrival you are greeted by our representative from Executive Travel who will assist you through immigration and customs formalities. After you have collected your luggage we will then take you, in deluxe transport, to your Cairo hotel and over night

After breakfast, you will meet your Egyptologist guide in the hotel lobby. Begin a day exploring desert antiquities dating back to the beginning of a civilisation that arose over 5,000 years ago. You will venture through the desert to visit some of Egypt's oldest sites. Firstly we visit to the Pyramids of Giza. Nothing evokes the long and intriguing history of Egypt as powerfully as the pyramids. Rising from the desert, Khufu (Cheops), Khafra and Menkaura symbolize the enigmatic tug of Egypt in our imaginations. The Great Pyramid of Cheops immortalizes the son of Sneferu and Hetepheres. Though little is known about this pharaoh, his pyramid is the largest of the three and is comprised of 2.3 million stone blocks, each weighing an average of 2.5 tons. Also see the colossal statue of the Great Sphinx, which has stood guard over the pyramids for millennia . Carved from an outcrop of rock, the Sphinx remains the ultimate symbol of Ancient Egypt with its lion's body and human head. After your exploration of the pyramids we drive to Memphis and Sakkara. The necropolis at Sakkara is where King Zoser's Step Pyramid was built. This vast site in the heart of the desert plateau is the largest necropolis in Egypt. Extending for almost five miles, the complex forms a collection of pyramids, temples and tombs that is fundamental to understanding the history of ancient Egypt. Memphis is where the remnants of the city's first capital, once the most cosmopolitan city in Egypt, are scattered in the desert. You will also see the carved limestone colossus of Ramses II

After breakfast, you will meet your guide at the lobby. Begin your introduction to the city of Cairo at the famous Egyptian Museum of Antiquities. The museum houses the greatest collection of Egyptian royal treasures in the world. Your expert guide will take you through the highlights, including the famous Tutankhamen Collection of golden treasures . After here it is off to visit The Alabaster Mosque of Mohamed Ali, the largest structure built during the first half of the 19th century. You’re then off to visit the most famous Bazaar in the middle east, the ancient Khan El Khliliy Bazaar Back to your hotel for an overnight.

After breakfast you will be transferred to the airport to take your flight to Luxor. After landing you will be transferred to your 5 star Nile cruise ship to begin your Nile cruise. After check-in, enjoy lunch on board. This afternoon you will visit the East Bank with its fabled Karnak Temple and Luxor Temple. The temple of Luxor is close to the Nile and parallel with the riverbank. King Amenhotep III, who reigned 1390-53 BCE, built this beautiful temple and dedicated it to Amon-Re, king of the gods, his consort Mut, and their son Khons. This temple has been in almost continuous use as a place of worship up to the present day. It was completed by Tutankhamun and Horemheb and added to by Ramses II. Towards the rear is a granite shrine dedicated to Alexander the Great. Karnak features Osiris amongst many inner temples . A 20-meter/66-foot high, mud brick enclosure wall, surrounds all of these buildings. The Amon Ra Temple was known during the Middle Kingdom period as Ipt-Swt, which means the Selected Spot. It was also called Pr-Imn, or the House of Amon. The name Al-Karnak in Arabic was derived from Karnak, which means fortified village.

Breakfast on board. Today you will discover the legendary Valley of the Kings encompassing the East Valley, home to the tombs of the New Kingdom Pharaohs, and the West Valley At present there is only one tomb open to the public - the tomb of Ay, who succeeded Tutankhamun to the Egyptian throne. The temple of Queen Hatshepsut of Dynasty XVIII was built just north of the Middle Kingdom temple of Mentuhotep Nebhepetre in the bay of cliffs known as Deir el-Bahri. In ancient times the temple was called Djeser-djeseru, meaning the ’sacred of sacreds’. It was undoubtedly influenced by the style of the earlier temple at Deir el-Bahri, which Hatshepsut chose as the site her temple in a valley sacred to the Theban Goddess of the West. More importantly, it was on a direct axis with Karnak Temple. Two huge ruined statues, the Colossi of Memnon, are around 17 meters/56 feet tall and once stood at the entrance gate of the mortuary temple of Amenhotep III, though very little of the temple behind them remains today. They were cut from two massive granite blocks, brought from quarries near Cairo, and carved to represent the pharaoh Amenhotep III of Dynasty XVIII. On to The Valley of the Queens which lies near the better known Valley of the Kings, on the west bank of the Nile across from Thebes (modern Luxor). This barren area in the western hills was chosen due to its relative isolation and proximity to the capital. The pharaohs of the 18th Dynasty chose to be buried in rock-cut tombs instead of the traditional building of pyramids as burial chambers (perhaps because of their vulnerability to tomb robbers).

Breakfast on board.Take in the Horus Temple in Edfu. The site of Edfu Tell was known as Wetjeset-hor, the place where the god Horus was worshipped and where, ancient mythology says, the battle between Horus and his traditional enemy Seth took place. The temple of Horus is the most well-preserved and the only one we know to have been completed. Built from sandstone blocks, the huge Ptolemaic temple was constructed over the site of a smaller, earlier temple, oriented east to west. The temple of Kom Ombo stands on the East Bank right next to the river, about 4 kilometers/2.5 miles from town. It was dedicated to two gods, Horus and Sobek, but primarily to Sobek, the crocodile God, together with his wife, who was in another form the Goddess Hathor. The temple is a Greco-Roman structure, dating back to the year 119 BCE, when Ptolemy VI, began its construction with limestone

Breakfast on board.Today, you will see the temple of Isis on the island of Philae, the centre for worship of the goddess Isis. It attracted pilgrims from all over the ancient world. One of the great temples of Egypt, it occupies about a quarter of the island and is the main temple on the island, with its huge, complete pylons and beautiful scenes. The temple is built in the same style as the temples of the New Kingdom. It also incorporates other elements, which appeared in the Greco-Roman period, such as the Mamisi (the House of the divine birth of Horus), and a Nilomete. The temple was submerged after the first Aswan Dam was built in 1906. Then visit the Unfinished Obelisk. Lying still in its original location, in a granite quarry in Aswan. It is 42 meters/138 feet in length and was most probably abandoned when some cracks appeared in the rock, during its construction. Had this obelisk been completed, it would have been the heaviest obelisk ever cut in Ancient Egypt, weighing nearly 1100 tons! It is believed that it was constructed and abandoned during the reign of Queen Hatshepsut of the 18th Dynasty. Afterwards, return to Aswan to visit the High Dam of Aswan, considered one of the most important achievements of the in the last century in Egypt. For many years, it was a symbol of the New Era of the Revolution of 1952. It provides Egypt with water and electricity.

Breakfast on board.This morning, disembark your cruise ship for an early transfer to the airport to fly to Abu Simbel.( if reserved ) The temples of Abu Simbel are amongst the most interesting Pharaonic temples. Located close to the southern border with the Sudan, it is 280 kilometers/174 miles south of Aswan and consists of two, rock-cut temples, which both date back to the reign of King Ramses II (1290- 1223 BCE). Unfortunately these unique temples suffered from the rising waters of Lake Nasser while the High Dam was being built. Return to Cairo arrive Cairo transfer for an overnight . If not going to Abu Simbel time at leisure.

Transfer to Cairo airport for departure according to your flight details. B.